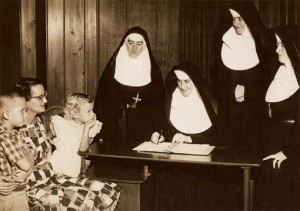 The St. Joan of Arc School is administered by the Irish Sisters of Mercy along with the pastor of St. Joan of Arc Church, Monsignor McGraw. It is located on S.W. Third Avenue, and has an enrollment of over 500 students in pre-kindergarten through eighth grade.

Our school opened in 1960 for grades one through four with an enrollment of 70 students. Classes that first year were held in a warehouse on 20th Street, which also served as a church. In August of 1961, the first section of the permanent school, containing eight classrooms, was completed. School opened in September 1961, with an enrollment of 280 students in grades one through eight.

A library, two classrooms, and an auditorium were added in 1964. To handle the steadily increasing enrollment in the years that followed, the auditorium was divided into six more classrooms. In 1968 a new auditorium was built, and in 1970 two additional classes were constructed. This now brought the total number of classrooms to seventeen. A Certificate of Occupancy was granted to the new Parish School Library and Religious Education Office in 1979.

A new building, which included a library, classrooms, a computer lab, and a music room, was constructed in 1986. The old library was turned into school administrative offices.

On December 11, 1988, our present church was dedicated. Just a few years later in 1990, the building, which had served as our church, was dedicated as Our Lady of Mercy Center. Today, it is used for our hot lunch program and as a social center for our many parish activities.

In 1995 Mrs. Deaver, a parishioner, donated one million dollars to the parish as a challenge gift for the purpose of providing a pre-kindergarten. The Administrative Office was torn down in 1996 and a two story building was dedicated on August 28, 1997, on that site. It houses grades five through eight, an art room, a media center, a science lab, and administrative offices.