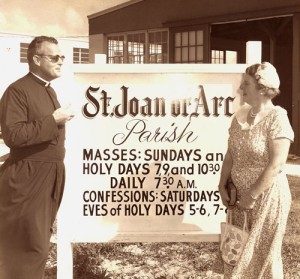 1960 saw the election of John F. Kennedy, the first Catholic President, Pope John XXIII preparing for a modernized Vatican Council, and the arrival of four Sisters of Mercy from Ireland invited by Bishop Coleman Carroll to open a grade school in Boca Raton.

The parish of St. Joan of Arc had a humble beginning several years before, and now the time was right for a school with Catholic values. The times also thrust the challenges of the cold war, civil rights movement, a growing drug culture, and moral decline upon young families. A return to traditional Christian values and teaching was desired.

It was the dream of a group of Catholic Women in the mid 1950s to have a church in Boca Raton. At a business meeting of this fledgling congregation, Boca’s first Catholic Women’s Guild was born. The church treasury was begun with each member putting aside 25 cents in a dish every time they met.

Father David Heffernan was charged with the task of finding a suitable place for worship until a church could be built. On December 1956, the first Mass was celebrated at Halbert’s Aerology Laboratory at 170 20th Street. Funds were raised by the faithful and a permanent church and the beginnings of a grade school soon followed.

The early days are recalled in a story from the Sun Sentinel: “On September 19, 1960, some 70 students gathered in the rambling old rented warehouse on 20th Street and
St. Joan of Arc School was born. Sister Mary Rosarii’s mission was to instruct a mass of squealing, squirming munchkins, ages 5 through 10. That first year the school only went through 4th grade.”

Sister Immaculata was another of the four Sisters of Mercy who traveled here from Ireland to start the school. She served as teacher and Director of Religious Education including CCD until 1984. Since then she has done extensive missionary work in Peru.

In 1960 the population of Boca Raton was about 7,000. Of that figure there were 250 families in the parish and under the leadership of St. Joan’s pastor, Fr. Robert Reardon enough money was raised to build a school. In 1961 the east wing welcomed 250 first to eight grade students.

For the mid and late 1960’s, the assassinations of President Kennedy and Martin Luther King, the beginning of the Vietnam War, and the shadow of a nuclear holocaust hung over young families. A test of Faith was the focus of the Vatican Council II. A return to renewed emphasis on the education of children, and the instruction in faith and morals of the laity was encouraged by Pope Paul VI. He was the first Pope to visit the United States.

Reflecting the new sense of urgency, families and friends of St. Joan of Arc, under the motivation of Pastor Fr. Paul Leo Manning, raised enough funds to open a second school building in 1964. Also the first kindergarten class began and the school enrollment rose to 420.

In times of stress and anxiety, families looked to the church for comfort, guidance, and stability. Evident at St. Joan was the beginning of CCD classes for children attending public schools, increased interest in Bible studies and rosary groups and faith formation classes for adults. A social hall was added to the parish in 1967 which also housed the start up program of out-reach ministries serving the hungry, homeless, and aged population in the community.

By 1972, when Fr. Ronald Pusak was appointed Pastor, the parish had grown to over 3000 families. As enrollment grew portable classrooms were erected until expansion in 1979 included a library, media center, a religious education office, and more classrooms. As a result, more teachers and lay staff were added to reinforce the basic curriculum of English, Science, Math, History, Catholic values, and expanded CCD and youth ministry programs. With the closing of the 70’s new moral challenges had been faced by both parent and student with “right to life” issues and the growing drug culture.

The 1980’s saw leadership from three presidents: Carter, Reagan, and Bush Sr. A recession was ended, recovery began, technology surged, more women were working, and communism dwindled with the Berlin Wall being torn down. Pope John Paul II was instrumental in the fall of communism and outreach to other religions, and he strongly supported youth education.

The population of Boca Raton and St. Joan of Arc parish increased dramatically. So when the new Pastor, Msgr. John R. McMahon, began his tenure in 1984, the first job was to raise funds for a new larger church. Members of the church formed “The Coat of Arms Society,” in support.

Bishop of Palm Beach, Most Reverend Thomas V. Daily wrote, “I am happy to support the Building Fund… I have observed and experienced the great spirit of St. Joan of Arc… I have seen in action the responsibility of priests, religious, and laity to the call of gospel stewardship… to promote the kingdom of God.”

The estimate for a completely new structure was 2.8 million dollars. It would be in compliance with some of the Vatican II suggestions: a separate chapel for Eucharistic Adoration, and adequate space for communicants to access the new altar facing the congregation. In addition, air conditioning, seating to accommodate 1200, and a family room was included.

Upon completion, Msgr. John R. McMahon wrote, “Good stewards give generously of their time, talents and treasure. Families here at St. Joan of Arc have made real sacrifices. This structure is a testimony of their beneficence and vision.”

In 1988 the new church was dedicated by Thomas V. Daily, the first Bishop of the Palm Beach Diocese, and in 1990 the old church became Our Lady of Mercy Center – a multi-use social center.

The 1990s brought a new set of uncertainties to the faithful. Terrorism was on the rise. We defended Kuwait from Saddam Hussein’s Iraqi’s invading troops. The Clinton administration faced bombings from Al Qaeda at the World Trade Center and at our U.S. Embassies in Africa. However, in spite of these anxieties, the tech revolution was in high gear with booming profits for companies and investors.

In 1995, the widow of a businessman from Minnesota donated one million dollars to the parish as a challenge gift to provide space for a pre-kindergarten. Because the parishioners responded with generous donations of their time, talent, and treasure a new two-story wing was added that housed grades 5-8, an art room, media center, science lab, and administrative offices. Enrollment increased to 685.

Under the direction of Sister Carmen Alvarez, St. Joan’s Hispanic Ministries grew to include English and computer literacy, Bible studies, and youth CCD.

For this decade, ending last year in 2010, the winds of war in Iraq and Afghanistan strained our financial and spiritual resources. Still remembered was the terrorist attack on the Twin Towers. Housing bubble, unemployment, rogue nation threats, and moral challenges to faith and family were abundant. Pope Benedict XVI guides the faithful through these turbulent times.

But again, in our own little part of the world, St. Joan of Arc Parishioners undaunted and alive in the Spirit of Christ continued building the Kingdom of God, spiritually and physically.

Some 60 ministries supported by the time, talents, and treasures of dedicated St. Joan parishioners helped the distressed and needy, visited the sick and homeless, initiated prayer and Bible study groups, and aided our minority brothers and sisters.

In 2005, Most Reverend Bishop Gerald Barbarito presided over the groundbreaking of a new Robert & Sonja Moran Sports Arena for the school. He said, “ The people of God at St. Joan of Arc parish will erect this Sports Arena for the glory of God and for the betterment of the human person. The parish is thus able to better serve the whole person: body, mind and spirit.” Also during this year, a “Blue Ribbon School of Excellence” was awarded by the U.S. Department of Education to St. Joan of Arc School. Only 296 schools in the entire country received this award.

In 2006, the magnificent bronze sculpture of the St. Joan of Arc Corpus of Christ was unveiled as it graced the sanctuary. This masterpiece original was commissioned by an Anonymous church member.

In 2008, another anonymous benefactor donated one million dollars towards enclosing the existing Sports Arena, adding air conditioning, locker rooms, and state of the art basketball equipment. Monsignor McMahon launched the Legacy Campaign and raised the matching funds needed to enclose the proposed multi-use arena. The Athletic Center was named in his honor.

In 2009, Monsignor Michael D. McGraw joined our parish as Pastor bringing with him 35 years experience in social service administration, higher education, graduate level seminary formation and spiritual direction. His concern for youth faith formation resulted in the opening of the new children and youth ministry house across the street from the church called The Ark. And as the 2010 school year began, Sister Ellen Murphy, Principal, said, “Parents today are looking for quality education that provides moral values as well as academic excellence. For 50 years we have done that and will continue to do so.” Sister Ellen also announced that applications and enrollments have increased for this year.

Through 2010 and 2011, turbulent times tested the faith of many. A killer tsunami and nuclear meltdown devastated Japan. Floods and tornadoes ravaged states on both sides of the Mississippi. Freedom’s flame kindled and burned in the Mideast. And as the economy stumbled a new challenge from home and abroad put financial pressure on congress and the president. Clinging to one’s beliefs was the only thing keeping many of the faithful above-water.

In his third year as Pastor of St Joan, Monsignor McGraw said, “In these times, the toughest part of managing a large parish with church and school is to keep everything in balance: spiritual, educational, social, and financial needs. All have to be factored in any decisions we make and we all have to work together.”

Restructuring began with a Finance Council made up of parishioner professionals, integration of Stewardship and Development units followed; and finally an evaluation of the 60 ministries for effectiveness was completed. Transparency was the objective and all details were reported in a year-end bulletin and Blessings Magazine.

Monsignor McGraw continued support of the Interfaith meetings with our Temple Beth El synagogue neighbors and other churches within the Diocese. Emphasis was placed on parishioner participation from the St. Joan community. An International Festival and a Family, Faith, and Fun weekend drew great support. And many technological upgrades were made in the School to accommodate increasing enrollment.

As the year drew to a close, Monsignor continues to lead the St. Joan “Spiritual Workforce” in ministry outreach, faith formation projects, and religious education in ministries. Most recently, a parish-wide communal discernment and planning process called Journey Forward began in order to identify needs, goals and parish responses that will move us assertively and creatively into the future.

Pastor’s Forward:  For 50 years that vision of fostering Faith and Family through church and school has been carried into the worlds of commerce, education, and government by some 20,000 graduates from St. Joan of Arc School. Lawyers, doctors, a diocesan priest and West Pointers are among that group. The parish has grown to thousands of permanent and part-time parishioners. Ministries number more than 50 with volunteers reaching out with care and compassion.

Against a backdrop of 50 years; through war and peace, recession and recovery, hurricanes and heat waves; the St. Joan of Arc community has stood firmly against adversity and humbly embraced prosperity. Through their unflappable support of church, school, and ministries; and their unshakeable faith in God’s grace and goodness, St. Joan of Arc has survived and flourished, and now we welcome the challenges of the years to come.