…Living close to You, we shall see Your hand, Your purpose, Your will through all things.
– Saint Ignatius of Loyola

HARVESTING OUR TEARS
A structured grief support program designed to guide people during their process of mourning
the loss of a loved one (parent, child, sibling, spouse, friend…).

JOYFUL AGAIN
A spiritual weekend program for widowed men and women to help them resolve the normal grief
they feel and begin to live again. Participants gather to view videos, reflect, share, and support one
another in the healing process. 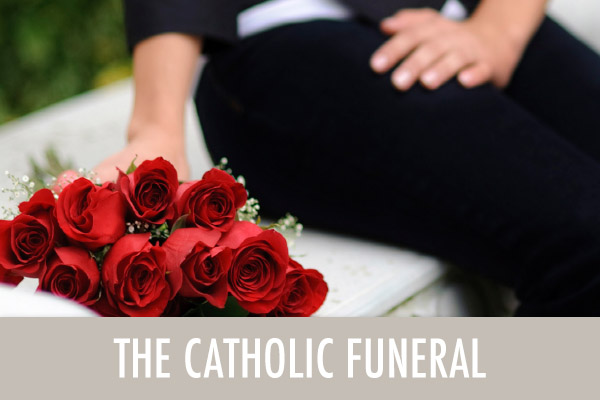 The definition of Roman Catholic Funeral Ritual is in Three Parts:

Characteristics:
The Roman Catholic Funeral Ritual, with its three distinct moments, is the preferred way to celebrate the death of a baptized Catholic. Each of the moments of the Ritual has significance.

Either the casket or cremains are brought to the Church for the Funeral Mass. The Roman Catholic Funeral Ritual is celebrated for any Catholic who has died recently and was an active parishioner. All requests for a Funeral Mass are scheduled, based on the availability of a priest and of a time, in the Chapel or Church.

The Parish has a list of nearby Funeral Homes. The Funeral Mass is preferably accompanied with music and hymns.  Music and singing at the Funeral Mass is arranged with the Parish Director of Liturgical Music who has sole responsibility for these services. These arrangements are made separate from those made with the Church.

A Few Words about Catholic Funerals

From time to time, someone will have questions about the Catholic Funeral Rites – questions like, “Does the Church allow for cremation?,” “Why are we being encouraged to bring the body into the Church for a Mass?” or “Wouldn’t it be OK if we just had a Mass said for the deceased?”

These are all great questions and the answers to them all come from our Catholic understanding of life, death, and life after death. As you probably know, Catholics believe in the value of all human life. We believe that God created each one of us, with the collaboration of our parents. He created us individually and with dignity. Therefore, everything we do in this world should promote the dignity of all human life and the associated vessel of that life, the human body.

God not only created each one of us, but He also made each one of us in His image (Gen. 2:2). The part of us that is most in His image is our life-force, our soul. In death, our soul leaves the body, but that does not destroy the dignity of the body that God created. Therefore, we are called to treat the body with dignity, even after death.

Finally, as Catholics, we profess in our Creed that we believe in the resurrection of the body. What we are professing at this time is that we believe that one day, at the end of time, our souls will be reunited with our bodies and God will raise us up to a new and glorified body, much like the body of Jesus after His Resurrection.

It was for the above reasons that the Church originally was not in favor of cremation. However, as our understanding of God’s omnipotence and work in our lives has grown, we better understand that God can not only reunite the soul with a cremated body but can indeed raise that body up to a new and glorified body.

However, we are still called to treat this body, even in its cremated form, with the dignity that the body should deserve.  Therefore, the cremated remains (now commonly called cremains) of the body should be handled in the same manner as the body.  In other words, the cremains should be buried or entombed, wholly and completely, shortly after the Funeral Mass. 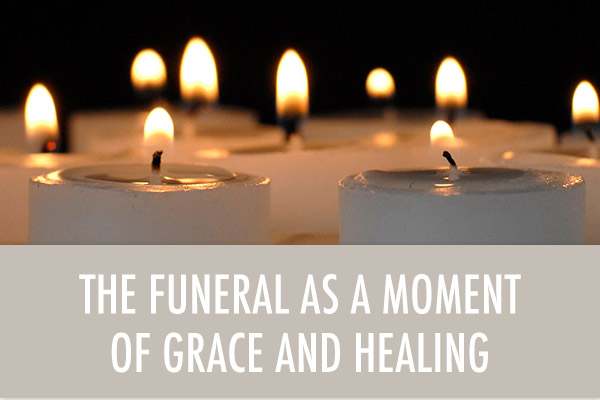 Certainly, as we’ve discussed before, one of the main reasons that we celebrate the Funeral Rites is in order that we may pray for our deceased relative or friend. We wish not only to honor them and to celebrate their life, but also to pray for their soul. In several places throughout the Funeral Rites we pray, “Eternal rest grant unto them, O Lord, and let perpetual light shine upon them.”  This is our hope and this is our faith – the faith we have in Jesus Christ, who is “the Light of the World” [Jn 8:12], as well as “the Resurrection and the Life.” [Jn 11:25].

However, the Funeral Rites are also celebrated for the bereaved – the family, friends and loved ones of the deceased. Through our prayers for our deceased loved one, we begin to find the healing we need for the loss we feel. There is a sense of completion, or closure, that comes with the celebration of the Funeral Rites. We gain comfort from the fact that we have done for them as they would have wanted us to do. Our faith teaches us that burying the dead is a corporal work of mercy and that praying for the dead is a spiritual work of mercy. Should not the one for whom we have love and affection also be the one for whom we make these great acts of mercy?

Different from a Funeral Mass, a Memorial Mass is a Mass requested to remember a Catholic when the funeral and burial have already taken place elsewhere.
A Memorial Mass is requested sometime after the burial and is meant to provide a way of remembering the deceased locally with those who knew them and wish to gather in prayer with other family or friends of the deceased.

The Memorial Mass does not replace the Roman Catholic Funeral Ritual.

It is a great tradition of our Catholic faith that we pray for our deceased brothers and sisters. Certainly that is one of the reasons that we celebrate the funeral rites mentioned above.  However, our prayers for the deceased may also include Masses said for the repose of their soul. Unlike Funeral, Memorial or Anniversary Masses, Mass Intentions are requested for our regularly scheduled Masses. These Mass Intentions can be requested by anyone. [By the way, Mass Intentions can also be requested for the living and for other occasions – such as birthdays, anniversaries, healing or thanksgiving.] Please contact our Parish Office to arrange for a Mass Intention.

Additional Information Available
A pamphlet, entitled “Guidelines for Catholic Funerals,” has been developed by the Diocesan Liturgical Commission of the Diocese of Palm Beach. This pamphlet is available from the parish office and may be helpful in further explaining Catholic Funeral Rites.